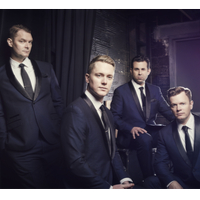 What happens when life imitates art? You get PBS favorite, Under The Streetlamp and their electrifying, inspiring music that is thrilling audiences across the globe. Originally established in 2009 by members of the Chicago company of the TONY-Award-Winning Musical Jersey Boys, this fraternity of gifted performers breathes new life into your favorite Doo Wop, Motown, and old time Rock n' Roll hits. Streetlamp's unique blend of harmonies and slick dance moves make it impossible to resist the urge to sing and dance along to songs from the heydays of AM radio. After their run with Jersey Boys in 2010, the founding members spent the next year cultivating their brand, always with the motto to stand on the shoulders of the artists that created the classic hits from the 50s, 60s and 70s. Playing sold-out shows in Chicagoland venues including Park West and The Paramount Theatre in Aurora, the boys caught the eye of a local producer. He believed their nostalgic rebirth of retro Rock n' Roll could have a home on PBS, where their music would reach millions around the country. The guys filmed a short promo and presented it to WTTW PBS in Chicago. The directive was clear, "You film your concert and we will be your presenting station." In the fall of 2011, Under the Streetlamp, LIVE! was filmed at the Star Plaza Theatre, in Merrillville, IN. The following spring their program started airing on PBS stations across the country. Word started to come in that LIVE!, was a hit and stations everywhere were adding it to their pledge schedule. Streetlamp launched its first tour in the spring of 2012 at Club Nokia, in Los Angeles. The band spent the next few months playing to enthusiastic crowds in historic venues across the country. Notable venues include Buckhead Theater, theatre at Westbury and Chautauqua Institute Amphitheater. The guys were thrilled to open for the legendary Temptations that fall and embarked on their first holiday tour, which launched at The Smith Center in Las Vegas. The second PBS Special, Under The Streetlamp, Let The Good Times Roll, was filmed in 2013 and much like LIVE!, found a home on PBS. In 2014, following the successful airings on stations across the country, Streetlamp found themselves on the road again. Taking their brand of retro rock n' roll across the pond for a three week tour in Belgium and the Netherlands and also, made an appearance on the Military Channel's Wounded Warrior Telethon hosted by Alan Alda and Joe Mantello. They were honored to open the 2014 season at the world famous Greek Theatre in Los Angeles and played the renowned venue Wolf Trap in Vienna, Virginia. Streetlamp took their brand of retro music to Mexico, and spent time in the recording studio mentored by Carl Giammarese of The Buckinghams and Marshall Thompson of the Chi-Lites.

2015 was devoted to touring and generating new material. And in November of 2015, Streetlamp's music from their holiday album Every Day's a Holiday, premiered on Sirius XM Radio. The success of the first two PBS pledge specials allowed Streetlamp the ability to produce a third concert celebration of the music that made them a hit nationwide. In the spring of 2016, Under the Streetlamp; Rockin' Round The Clock was filmed, once again at the famed Star Plaza Theatre. PBS stations around the country and Canada are still airing Rockin' Around the Clock today! Also in 2016, Under the Streetlamp made their pops symphony debut with the Desert Symphony, in Palm Desert, California. Since that first symphony appearance, Streetlamp has had the pleasure of performing with some of the most well-known symphony orchestras in the country including the Utah Symphony, the Phoenix Symphony, the Cleveland Pops Orchestra, the Knoxville Symphony, the Milwaukee Symphony, the Oklahoma City Symphony, and the world famous Detroit Symphony, just to name a few. In the spring of 2016, the band began talks with MediaVision about collaborating on a new program for public television. This exciting two-part docu-series, Harmonies for Healing, centers on a singing competition in Northwest Indiana. Mentored by Under the Streetlamp, singers of all ages, genders, backgrounds and ethnicities battled for a chance to perform in concert with the retro quartet. Featuring all the amazing talent and drama of other music competition series, the guys made sure to approach the contestants with kindness and inspiration, instead of criticism. This moving, musical event was built on the premise that music has a healing power that can be tapped into when faced with life's ups and downs. The docu-series debuted on PBS stations around the country in 2017. Harmonies for Healing is still airing nationwide today. In 2018, the band continues to play to sold-out venues across the US. They are currently working on two studio albums, Under the Streetlamp: Hip to the Holidays, and Under the Streetlamp: Listen to the Music. A highlight this year was performing at the famed Summerfest Musicfest in Milwaukee, Wisconsin. Streetlamp's Hip to the Holidays tour will be in full-swing in November and December. 2019 looks to be another fantastic year for the guys! In April, Streetlamp is thrilled to be making their New York City debut at Sony Hall and will be performing three shows with the world-renowned Nashville Symphony. The remainder of the year will see the guys in many of the same memorable cities and venue they have performed in previously and many new venues as well. Streetlamp has been able to keep a fresh vibe with new twists along the way. The mission and objective has always remained very clear, to breathe new life into timeless songs in order to excite audiences and ensure everyone leaves a live concert with a smile or sings along when hearing their music on the radio, streaming or CD. With irresistible charm and rapport, of a modern day Rat Pack, Under the Streetlamp proves why retro never sounded so now.

TICKETS:
Tickets are $25, $30, and $35 plus tax and an online/phone ticketing fee (this fee is waived when tickets are purchased at the Gift Shop). Tickets in the ADA section are for patrons with mobility disabilities and up to three companions. If companion seating is not available because the ADA section is sold out, Grand Falls will offer other seats as close as possible to the accessible seat, if available, at the purchase price of the other section.