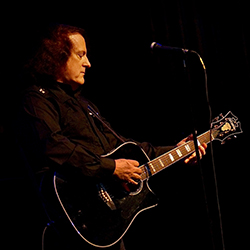 Existing ticket holders should hold on to their tickets as they will still be valid for the new date. If you are not able to attend the rescheduled show, refund requests will be honored until August 31, 2021. To request a refund or for more information, please e-mail gfviphosts@grandfallsresort.com.

Tommy James' road to superstardom began when a nightclub DJ in Pittsburgh discovered a two-year-old record by "The Shondells" and played it at his weekend dances. The crowd response was so overwhelmingly positive that radio deejays started spinning it and an enterprising record distributor bootlegged it, selling 80,000 copies in ten days. By May of 1966 "Hanky Panky" was the number one record in Pittsburgh and Tommy James was a sensation.

A Pittsburgh promoter tracked Tommy down at his home in Niles, Michigan and urged him to "come on down!" Unable to put the original group back together, Tommy hired a hot P-burgh R&B bar band to replace them. Two weeks later he signed a record deal with Roulette Records. The label, in turn, put their promotion team to work on "Hanky Panky" and made it the summer smash of '66. Thus began one of the longest strings of nonstop hits in recording industry history!

Tommy James promptly followed "Hanky Panky" with two more million selling singles - "Say I Am (What I Am)" and "It's Only Love" - and the Hanky Panky album, which went gold just four weeks after its release.

With three hits under his belt, Tommy brought in producers Bo Gentry and Ritchie Cordell, and the three produced seven back-to-back smash singles: "I Think We're Alone Now," "Mirage," "I Like The Way," "Gettin' Together," "Out Of The Blue," "Get Out Now," and the party rock rave-up "Mony Mony." The Gentry/Cordell/James team also produced three platinum albums.

In 1968, Tommy became one of the first artists to experiment with music videos, creating a mini-film around "Mony Mony" for theatrical showings, thirteen years before MTV hit the airwaves.

After spending three months on the road that year with Vice President Hubert Humphrey — the first time that a rock artist had been asked to campaign for a presidential candidate — TJ took over the creative reins of his career by writing and producing the groundbreaking "Crimson and Clover" single and album. (Humphrey wrote the C&C album liner notes, another first.)

Released in early 1969, it went multi-platinum, and spawned two more monster hits: "Do Something To Me" and "Crystal Blue Persuasion." A fourth song from the LP, "Sugar On Sunday," rose high on the charts in a cover version by The Clique.

Tommy followed up the Crimson and Clover album with Cellophane Symphony, which featured the newly developed Moog Synthesizer and included yet another Top Ten single, "Sweet Cherry Wine."

Tommy James was on a roll! Not only did the total sales of his four 1969 hits top those of the Beatles that year, his second volume of greatest hits - The Best Of Tommy James and The Shondells (featuring "Ball of Fire") – also appeared and ultimately sold over 10 million copies.

Alone among his 1960s contemporaries, Tommy had successfully made the transition from a Top 40 pop singer to a respected classic rock album artist.

In 1970 he released the gritty rock 'n' roll Travelin' album (thought by many to be the band's best work) which contained the gold singles "She" and "Gotta Get Back To You,". Tommy then took a break.

Upon his return, Tommy wrote and produced the million selling single "Tighter, Tighter" for the group Alive And Kickin'. Over the next four years Tommy scored an additional 12 chart singles, among them "Come To Me," "Ball and Chain," "I'm Comin' Home," and "Draggin' The Line." During that time he also produced the albums Tommy James, Christian Of The World, and My Head, My Bed And My Red Guitar; the latter of which he recorded in Nashville with an all-star cast that featured ace guitarist Pete Drake and Elvis Presley sidemen, Scotty Moore and DJ Fontana.

In 1974 Tommy left Roulette Records and released the In Touch and Midnight Rider albums for San Francisco-based Fantasy Records. Returning to the East coast in 1980, he signed with Millennium Records and racked up three more chart singles, including the million selling AC chart-topper "Three Times In Love." In the 1990s, Tommy formed Aura Records and scored three Top 5 AC hits from his Hold The Fire album.

Meanwhile Tommy's songs had become pop culture classics and were being covered by everyone from punk rockers to country icons. In 1987, Tiffany and Billy Idol's versions of "I Think We're Alone Now" and "Mony Mony" respectively battled for the top spot on the pop chart for a solid month, and each eventually went to #1. It was the first time in music history that two cover versions of songs by the same artist hit #1 back-to-back.

That was just the beginning. In the following years, artists such as Bruce Springsteen, Kelly Clarkson, Prince, Dolly Parton, Santana, R.E.M., Joan Jett & The Blackhearts, Billy Idol, Tom Jones, The Killers and many others, recorded his songs and performed them live.

In 2006, Tommy marked the start of his fifth decade as a recording artist with the release of a fan-pleasing, career-spanning retrospective 40 Years: The Complete Singles Collection (1966-2006), which included all 48 of his singles. Next came his I Love Christmas album.

His autobiography – Me, The Mob and The Music – became a bestseller for Simon & Schuster, garnered rave reviews from critics and industry insiders, and was chosen by Rolling Stone magazine as one of the 25 greatest rock 'n' roll memoirs of all time (#12).

This thrilling tale of Tommy's career and his tumultuous relationship with the "Godfather" of the music industry, Morris Levy, is on its way to becoming a major motion picture: a project helmed by producer Barbara De Fina, whose credits include Goodfellas, Casino, Cape Fear, Color of Money, The Grifters, The Age of Innocence, and Silence. With top Hollywood screenwriter Matthew Stone completing the screenplay, Tommy's story took a critical step forward in the always-lengthy film development process.

Today, Tommy's career is still in high gear. He signed an agreement with Sony/ATV Music Publishing to represent his self-published songs and the accompanying masters. This move means that all of Tommy's songs are now being pitched for film, television, advertising and other uses by the world's largest music publishing house.

Over the years, the response has been overwhelming with Tommy's music being featured in national ad campaigns for the likes of Nissan and Kohl's; and grabbing prominent placements in movie and television soundtracks, including 16 Cloverfield Lane, Moneyball, Pirate Radio, Austin Powers, We Are Marshall, The Italian Job, Cape Fear, Forrest Gump....and Crowded, Almost Human, The Goldbergs, Aquarius, Boston Legal, My Name Is Earl, Men of a Certain Age and Criminal Minds.

"Crystal Blue Persuasion" in particular scored big-time on the 2013 season finale of Breaking Bad and The Simpsons BB parody episode.

To date, Tommy has sold over a hundred million records sold worldwide, and has received five BMI "Million Air" awards in recognition of 22 million broadcast spins of his songs.

Today Tommy is still rockin', performing his many timeless hits to sellout crowds across the country, and celebrating his 50th year in the music business by recording a new album.

TICKETS:
Tickets are $45, $50, and $55 plus tax and an online/phone ticketing fee (this fee is waived when tickets are purchased at the Gift Shop). Tickets in the ADA section are for patrons with mobility disabilities and up to three companions. If companion seating is not available because the ADA section is sold out, Grand Falls will offer other seats as close as possible to the accessible seat, if available, at the purchase price of the other section.